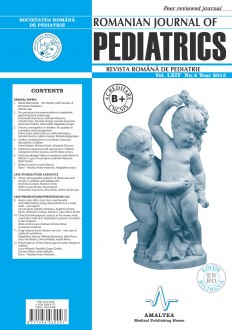 The immune system shows a complex role to defend the body in response to “non-self” antigens, respond abnormally to antigens allergens (hypersensitivity and autoimmunity) and shows immune tolerance by lack of reactivity to its own structures (self).

Aim. The aim of this study is to demonstrate that in atopic dermatitis immune deficiency influences the development of atopy, disease severity and comorbidities.

Material and methods. Following medical record review, 135 cases diagnosed with AD were included in the study. Statistical analysis was performed using SPSS v20 for determining the frequency and testing the hypotheses, for p < 0.05, by t tests and One-Way ANOVA.

Results. Of the 135 cases, 51.9% were male children and 48.1% female children aged 1 month to 127 months with a mean of 26.21. According to total serum IgE level, 64.4% of patients had elevated IgE levels, 35.6% normal levels. According to the SCORAD, children had mild AD in 20.7% of cases, moderate in 70.4%, and severe in 8.9%. IgA deficiency was found for 48.1% of cases, and for 51.9% normal. IgG deficiency was found in 38.5% of cases. The independent samples t tests showed statistical significant demonstrating correlations between IgE level and IgA immune deficiency, between SCORAD and IgG and IgA immune deficiency. Atopic march is influenced by elevated IgE, IgA and IgG immune deficiency, p <0.05.

Conclusions. Atopy in AD can be influenced by complex factors, both internal and environmental, but this remains a controversial topic. External factors acting on a background genetically predisposed to atopy trigger the manifestation of AD.