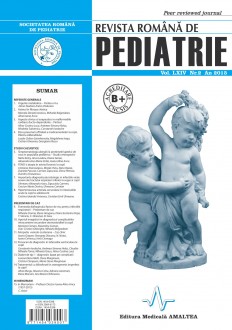 Introduction. Recent meta-analyses of population-based studies show considerable heterogeneity in the prevalence of perceived and confirmed allergic reactions, as well as sensitization to cow milk ingestion. Adverse reactions to cow milk ingestion have different prevalence patterns in different age groups. There is increasing public concern about the true prevalence and a possible increase of food allergies over time, particularly among parents, child care and school staff, health care providers, regulators and food producers.

Materials and methods. We performed a retrospective study of children admitted in IOMC hospital in Bucharest between January 2011 to May 2013. The primary aim of this study was to establish and compare the prevalence of confirmed allergic reactions to food in young children from IOMC hospital to known symptoms established by different researches.

Discussion. We found that symptoms of adverse reactions to milk are common in infants and occur regardless of GA at birth or sex. As expected, we found that more children with CMA where living in urban than rural areas. The symptoms often appear during the first year of life, even in exclusively breastfed children. Important signs and symptoms to alarm CMA were found to be failure to thrive, anemia, gastrointestinal and respiratory complains.