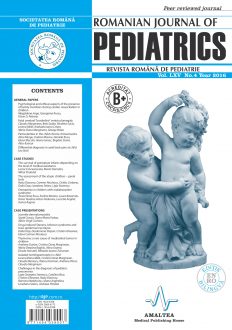 Ventriculomegaly represents the dilation of the cerebral ventricles above 10 mm, being classified as it follows: mild or “borderline” (10-12 mm), moderate (13-15 mm) and severe (over 15 mm). The incidence varies very much depending on the used technique and the gestational age. The level of choice in order to obtain the most exact measurement of the ventricular diameter is at the level of choroid plexus glomus. The MRI is another method to assess the fetal brain that allows also the evaluation of the cerebral surface. Unilateral ventriculomegaly is caused by the morphologic, physical or functional obstruction of foramen Monro. “Borderline” ventriculomegaly can be associated with chromosomal anomalies, congenital infections, cerebral vascular accidents or hemorrhage, but also other extra-cerebral anomalies. The factors that influence the prognosis of children diagnosed with mild ventriculomegaly are: gender, gestational age, ventricular size, uni- or bilateral impairment, symmetrical or asymmentrical bilateral ventriculomegaly, progression of ventriculomegaly – probably the most important factor of prognosis, regression of ventriculomegaly. The parents must be informed about the fact that there are certain ultrasonographic limitations regarding the differentiation of an isolated “borderline” ventriculomegaly of a ventriculomegaly associated to other occult anomalies that can not be identified initially, in order to take an adequate decision. The control fetal ultrasound is preferable to be performed after approximately 1-2 weeks from the moment of initial diagnosis of “ventriculomegaly”.