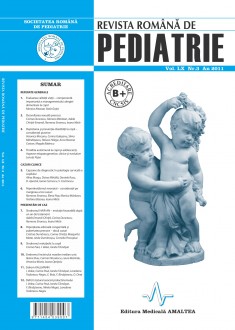 Puberty is a biological process that involves major physical and psychological changes at the end of which the child becomes an adult. Clinically, the onset of puberty is announced by the appearance of secondary sexual character that develops specific females, respectively to form the adult male, going through the five stages described by Tanner. The onset of puberty varies by race, ethnicity, geographic location, environmental and nutritional conditions, in the Caucasian population ranging from 8 to 12 years. Early sexual development is arbitrarily defined as the occurrence of secondary sexual characteristics before age 8 in girls and before age 9 in boys, respectively. Precocious puberty is classified into three broad categories: (1) gonadotropin dependent precocious puberty (central), (2) gonadotropin independent precocious puberty (peripheral), (3) partial precocious puberty. This paper aims to present the particular appearance of secondary sexual characteristics, the hormonal changes and the therapeutic possibilities of each category. Close follow-up of children, detailed medical history, chronological record of pubertal signs, repeated anthropometric and hormonal measurement are the key to a correct diagnosis and an early and effective treatment.