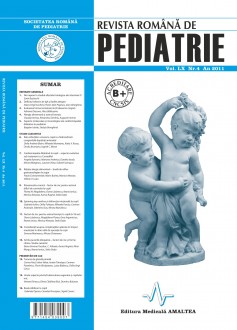 In dilated cardiomyopathies, carvedilol can be a therapeutic resource, but experience with children is limited.

Objectives. The study of the clinical and paraclinical evolution of dilated cardiomyopathies in children, unresponsive to conventional treatment with angiotensin converting enzyme inhibitors, diuretics, digoxin, requiring the association of carvedilol; the study of the pharmacokinetics of carvedilol in children.

Materials and metods. 16 children with severe dilated cardiomyopathy and left ventricular ejection fraction ≤ 31% were clinically evaluated according to the ROSS / NYHA score and echocardiographical. The measurement of carvedilol in human plasma, high performance liquid chromatography associated with mass spectrometry the external standard method, was used for 7 patients.

Results. Of the 16 children with dilated cardiomyopathies treated with carvedilol as adjuvant medication to conventional therapy, 14 evolved towards clinical and echocardiographic improvement and two towards death. Clinically, the children tolerated carvedilol well, the NYHA score improved and the left ventricular ejection fraction increased from 31% to more than 40%. The study of the pharmacokinetics of carvedilol was performed for 7 subjects. It was demonstrated that the absorption rate does not change with the increase of the administered dose. The time to reach peak concentration is identical for all subjects. The mean half-time is 2.88 hours, being much shorter than in adults. The mean residence time of carvedilol in the body varies similarly, 4.28±1.52 hours.

Conclusions. At the pediatric age, dilated cardiomyopathies unresponsive to conventional treatment with angiotensin-converting enzyme inhibitors, diuretics and digoxin benefited from the association of betablocking medication – carvedilol, with the improvement of the NYHA/ROSS score and of the left ventricular ejection fraction. The study of the pharmacokinetics of carvedilol in children evidenced a mean half-time of 2.88 hours and a mean residence time in the body of 4.28±1.52 hours.