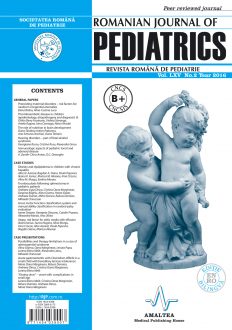 Chronic otitis, one of the major causes of pediatric hypoacusia is frequent associated with some allergic diseases. The continuous rice of atopic diseases prevalence in childhood, involves a multidisciplinary approach of Eustachian tube dysfunction, adenoid inflammation or recurrent otitis, for a complex pathogenic management.
The objective of this study was to determinate the association between otitis media and the allergic diseases with the implication in the treatment and evolution of this patients.
Methods. Retrospective study on 92 children, between 6 month and 6 years, admitted in II Pediatric Clinic, Clinical Hospital of Children “Sf. Maria” Iasi with diagnosis of acute otitis media, for a period of 1 year.
Results. Majority of cases (61patients) have been suppurate otitis, 31 cases have been otitis media with effusion out of which 23 have been recurrent. Association with allergic diseases has been more frequent in children with serous otitis media (26/31 cases). 4 cases with suppurate otitis media have developed adverse reaction to antibiotics with major implication in the cases evolution. Association with gastroesophageal reflux was relatively similar between cases with serous otitis and the suppurate ones (10/31 cases and 11/61 cases). From the atopic patients with gastroesophageal reflux, 10 presented cow’s milk protein allergy.
In conclusion, the children with otitis media, especially those with recurrent none suppurate form should be investigated for atopy and, eventually, for gastroesophageal reflux, possibly with determination of the allergic markers or of pepsin in the otic exudates, in order to a targeted therapeutic management.