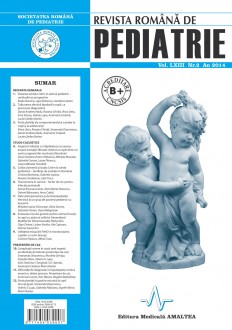 Objectives. In the past few years we observed an increase in the number of patients with inflammatory bowel disease. We aimed to determine the epidemiology of this pathology among children in Romania over a 10 years period.

Matherial and methods. The survey was conducted in Pediatric Gastroenterology Departments in Bucharest. We selected patients beeing carred for inflammatory bowel disease in 2011. A similar study, performed 10 years ago in 2001, reported the same epidemiologic characteristics and comparative data were available.

Conclusions. Inflammatory bowel disease has tripled in the last 10 years. Ulcerative colitis is still the most frequent form but we report a growing number of cases with Crohn disease.