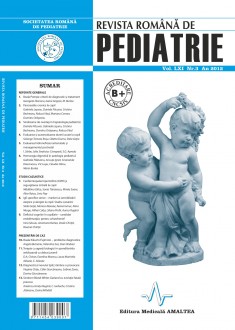 The diagnosis of the Spitz nevus remains a challenge

Introduction. Spitz nevus is a benign melanocytic lesion, most frequently met in children and in the young adult, at the level of the head and of the extremities, with a rapid evolution (months), that worries both the family and the doctor. Aim. To highlight the difficulties in diagnosing clinically, dermoscopically and histopathologically a lesion that may resemble to a melanoma.

Material and methods. We present two cases of Spitz nevus, appeared at the age of 10 and 16, respectively, as a blackish pigmented lesion and a pink, non-pigmented one, for which a consultation at the clinic was demanded, for the suspicion of malignity. Both lesions were clinically, dermoscopically and histopathologically evaluated.

Conclusions: Diagnosing Spitz nevus continues to be a clinical, dermoscopic and, last but not least, histopathological challenge, and the surgical excision is recommended in most cases.