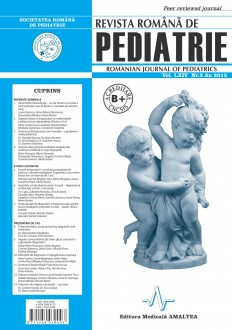 PROGNOSTIC FACTORS IN THE EARLY POSTOPERATIVE OUTCOME OF ESOPHAGEAL ATRESIA. THE EXPERIENCE OF A TERTIARY CENTER OVER A 5 YEARS PERIOD

Purpose. The aim of this study was to determine the influence of prognostic factors on the postoperative outcome of esophageal atresia patients, taking into consideration loco-regional particular features.
Methods. A retrospective analysis of the medical records of 28 patients diagnosed with esophageal atresia was conducted, using a logistic regression model. Patients had been admitted in our hospital between 2009-2014. The survival rate was recorded separately from the independent factors, such as demographic features, weight at birth, the timing of surgical treatment, co-morbidities, postoperative prognosis and management of complications.
Results. According to the Spitz prognostic classification, there were 21 patients in group I (birth weight over 1500 g with no major anomaly), 3 patients in group II (birth weight less than 1500 g or major cardiac anomaly) and 4 patients in group III (birth weight less than 1500 g plus major cardiac anomaly). The mortality rate was 33% in group I, 100% in group II and 100% in group III. The mean birth weight was 2282 g ±2SD, and the mean gestational age was 31 weeks. The age at initial presentation was over 24 hours in 15 patients, with fatal outcome in 13 of them. The cardiac malformations presented as the associated anomalies with the highest risk. Surgical treatment was as follows: primary anastomosis in 21 cases, cervicostomy and gastrostomy in 6 cases, and Foker technique in 1 case.
Conclusions. The analysis of this series indicated a low survival rate for this pathology in our center. Besides the prognostic factors cited in literature (low birth weight and age at birth, associated cardiac malformations), we include, as risk factors for the increased mortality, the delayed diagnosis and presentation at our tertiary center. The further refinement of a multidisciplinary approach towards this pathology would contribute to a higher survival rate and an improved result of the therapeutic management.