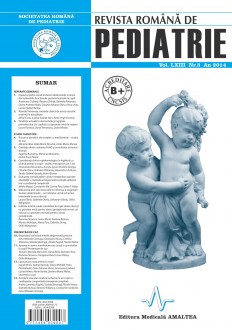 Objectives. The aim of this study was to determine the clinical value of infrared spectroscopy (NIRS) in early detection of ischemic bowel modifications in newborns from neonatal intensive care unit.

Material and methods. We performed a prospective observational study over a period of 18 months, on a group of 15 newborns with gestational age between 25-38 weeks. All infants included in the study had one or more clinical signs of digestive pathology. Starting non-invasive continuous monitoring by cerebral and abdominal NIRS was performed according to the appearance of the first digestive changes between day 3 and 21 of life. Oxygen saturation was measured in the cerebral and abdominal regions (rSO2 -C and rSO2 -A) and cerebro-splanchnic oxygenation ratio (CSOR) was carried out. Meanwhile infants were monitored by biological and hemodinamyc methods. The monitoring period was variable, being between 1-5 days, the period required for establish the causal diagnosis. Statistical significance was determined using statistical t-test. “p” was calculated for confidence interval of 95% (statistical signifi cance p < 0.05). Also was evaluated the area under the receiver operating characteristic (ROC) curve to determine the suitability of this technique as a diagnostic tool.

Results. The study group included: 3 neonates with congenital heart disease(CHD) with significant decrease in aortic blood flow, 4 neonates with necrotizing enterocolitis (NEC) stage II, 3 pacients with intrauterine growth retardation (IUGR) severe form, 1 newborn with intestinal atresia and secondary peritonitis, 1 newborn with Rh incompatibility anemia with placental anasarca and 3 pacients with sepsis and associated gastrointestinal pathology without NEC criteria. In all 15 patients, NIRS measurement values were significantly lower compared to the normal range, with different values depending on the severity of the condition. Mean rSO2 -A value was 41.85 (interquartile range15-85) compared to an average value, considered normal. Also the average value of the CSOR ratio was significantly lower compared to the normal. The lowest values of rSO2 -A at the beginning of simptoms has had the group of patients with CHD followed by those with NEC. The area under the ROC curve was 0.95 (95% CI 0.88 to 1.02) for the CSOR ratio. Considering a limit value of ROCS for prediction of intestinal ischemia < 0.75, this ratio proves to be an excellent indicator of changes in bowel circulation.

Conclusion. NIRS method has the potential to detect the occurrence of alterations in intestinal oxygenation and perfusion, allowing early detection of bowel ischemia, just before the modification of other hemodynamic parameters. NIRS is a non-invasive, highly accurate method, to follow in evolution the changes in tissue perfusion under the treatment instituted, also being able to guide treatment, proving helpful in clinical practice.