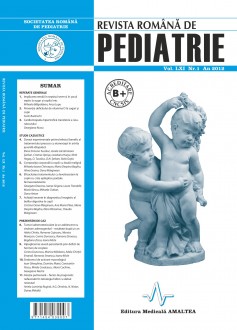 Results. Seven year old boy hospitalized for high fever, chills, and alteration of general state, hepatosplenomegaly, peripheral and central adenomegaly, sudden onset of anemia and thrombocytopenia. Lab results also showed elevated triglycerides and ferritin, moderately high ESR, high CRP, presence of infl uenza B virus in faryngian swab (PCR). Acute myeloid leukemia was excluded on the base of bone marrow biopsy. Treatment was started with 400 mg/kg intravenous immunoglobulin and resulted in normalization of clinical and biological picture, including mesenteric adenopathy remission. MAS secondary to infl uenza B was a diagnosis consistent with the picture of the clinic, biologic and evolution pattern. As described in the literature, MAS represent the macrophage tissue expansion (or of the hystiocites), which is often triggered by infection (EBV, CMV) or changes in drug therapy of chronic rheumatic diseases (Still’s disease, SLE, vasculitic syndromes). Pathogenic mechanism of MAS is characterized by proliferation of macrophages, correlated with decreased cytotoxic function of NK cells and cytotoxic lymphocytes – often determined by mutations in the gene that encodes perforina, PRF1, or mutations in MUNC 13-4, another gene that is involved in the release of perforine into the immune synapse with a target cell.

Conclusions. The occurrence of MAS complicating an underlying disease (vasculitis, SLE) or acute infection is a vital element of aggravation and imminent danger that should be immediately diagnosed and vigorously treated.