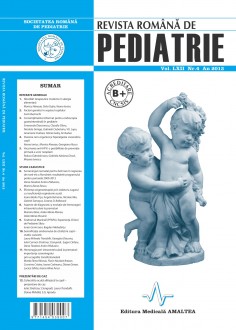 DIAGNOSTIC AND EVOLUTIONARY ASPECTS OF INTRAVENTRICULAR HEMORRHAGE IN PRETERM INFANTS

Objectives. The aim of this study was to asses the risk factors, the grades of severity, and the complications associated with intraventricular hemorrhage.

Results. The incidence varied indirectly proportional to gestational age, being higher among preterm VLBW and ELBW. The main incriminated risk factors were: acidosis, respiratory distress syndrome, hypoxia and hypercarbia. The distribution of cases based on the degree of severity was as follows: grade I, 204 patients (39.68%), grade II, 142 patients (27.62%), grade III, 91 cases (17.70%) and grade IV, 77 cases (15%). Most cases were asymptomatic, being diagnosed based on routine ultrasound. 36% had saltatory evolution, with progressive deterioration of neurologic status, altered muscle tone and respiratory distress. 21% had catastrophic evolution with bulging fontanelle, projectile vomiting, seizures, decerebrate posturing, and apneic spells. Upon follow-up at 6 months, the outcome of the sonographic signs depended on the severity of the bleed, 28.9% cases presented complete resorption, 35% germinal matrix cyst and 25.87% ventriculomegaly.

Conclusions. Transfontanellar ultrasound was the diagnostic method of choice. Most intraventricular bleedings were diagnosed among VLBW and ELBW infants, and were severe forms of disease. Mild and medium forms of disease had good outcome, with partial/ complete resolution of the ultrasonographic signs. Posthemorrhagic obstructive hydrocephalus was the most common complication.