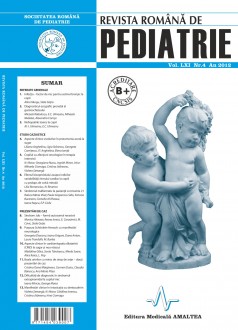 Introduction. Lesch-Nyhan disease is a genetic disorder, X-linked recessive, of the purines metabolism, characterized by deficiency of hipoxanthine-guanine-phosphoribosyltransferase (HPRT- 1) which results in an increase of uric acid in both the blood and the urine. The gene is located on the chromosome X q26- q27.2.

Case presentation. It’s presented the case of a boy now 6 years old, with multiple admissions in Pediatric Neurology Clinic, “Al. Obregia” Hospital from the age of about 1 year for psychomotor developmental delay, movement disorders, initially diagnosed with cerebral palsy, then at the age of 3 years old, once the selfmutilation behavior and hyperuricaemia were noticed we suspected Lesch-Nyhan disease which was genetically confirmed at the age of 3 years and 6 months.

Conclusions. A clinical picture of spastic-dyskinetic “Cerebral Palsy” with normal cerebral MRI can underlay a metabolic disorder with genetic transmission and increased risk of recurrence.