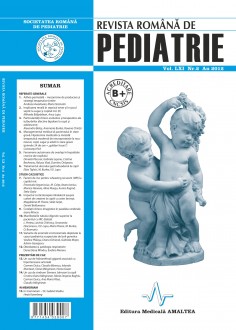 Cerebral palsy is a group of persistent (but not necessarily unchanged), movement, posture, muscle tone, and motor skills disorders, non-progressive, with early onset, due to non-progressive impairments, occurring on an immature brain or a brain under development (prenatal, perinatal, postnatal during the fi rst 3-4 years of life). [1] It is associated to a variable extent with: cognitive disorders, epilepsy, sensory deficits, behaviour disorders. The aetiology of cerebral palsy is sometimes difficult to identify, and neuroimaging plays an important role in this respect. The aim of this study is to review the results of the imaging investigations in relation to the clinic.

Material and method: it is a retrospective trial of the patients hospitalized in the Paediatric Neurology Clinic of the Al Obregia Hospital in 2010 with the diagnosis of cerebral palsy, who underwent imaging investigations.