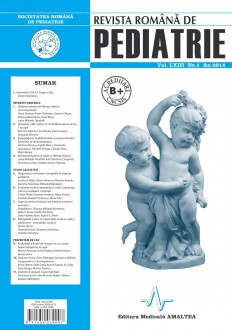 Objectives. The incidence and prevalence of renal disease in actual children poisoning is not fully known because renal structural and functional changes caused by nephrotoxins are nonspecific and toxic etiology is often overshadowed. This study aims to assess the prevalence of toxic nephropathies in a pediatric population, the etiology, clinical and laboratory aspects, prognostic factors, frequency of use of extra renale puration techniques and their impact on survival.

Materials and methods. We conducted an observational, retrospective, multicentric study, over a period of 10 years, between 2003 and 2012, on 82 patients aged 0-18 years from two pediatric poison centers: the department of Toxicology SCUC “Grigore Alexandrescu” Bucharest and the Department of Pediatric Nephrology and Toxicology at the Emergency Clinical Hospital for Children in Cluj-Napoca. In the study group were included patients with acute intoxication who presented acute kidney injury defined by the AKIN criteria.

Results. The etiology of poisoning that have associated acute kidney injury is dominated by drugs – 36.6%, followed by mushrooms – 24,4%, insecticides – 18.3% and alcohols – 11%. In smaller percentages we noted poisonings with caustic substances, hydrocarbons, nitrites and lead. Looking in detail we can observe that for the etiology of drug poisonings multidrug intoxications prevailed followed by poisonings with antibiotics most commonly gentamicin. In the case of multi drug poison ings the substances most frequently involved were: combination of Paracetamol, NSAIDs andMetamizol.In mushroom poisonings, in most cases were involved mushrooms with long incubation period probably Amanita Phalloides. For the Insecticide poisonings the etiology was represented mainly by organophosphorus and carbamate insecticides. The etiology of alcohol poisoning most commonly included cases of ethylenglycol. On the group of 82 cases studied, 26 deaths were recorded, mortality was 32%. We observed that oliguria, anuria, edema, hemorrhagic manifestations, polypnea, signs of shock, coma, and hepatic hepatocytolisis were risk factors for death in our study. The methods of extrarenal epuration or renal replacement treatment were carried out in 41% of cases. They were not protective factors in the study group.